Anybody but New England.

Any personal bias or affinity for any team to win?

As for the NFC, I'm pretty much neutral regarding a choice here. I like both teams, but perhaps lean ever so slightly towards the Saints because of their better season record and Drew Brees, who is a high-quality person that has done just a ton of good works in and around New Orleans

With the AFC, however, I do favor the Chiefs. I like the Patriots as an organization and team--from ownership on down to the players--but would like to see a new team go to the Super Bowl from the AFC. I don't think that domination by one team for many years is ultimately good for the game. I'd also like to see Chiefs' HC Andy Reid, who seems like a helluva good guy, have another shot at the Lombardi trophy. He coached the Eagles to Super Bowl 39 in 2005, with Donovan McNabb at QB, but lost that one to the Patriots.

As for the Super Bowl game, I guess I'd hope for the NFC team to win, although there again, I'd be happy to see either team win.

I think these two Conference championship games should be good ones. Chiefs and Saints are favored by only about 3 points, I believe--just the home-field advantage.

For what it's worth, here is Bleacher Report's analysis of the two games:

For those who remember Tom Clements from his days in the CFL, you may be interested in his latest destination in the football world. According to Pro Football Talk, Clements will be joining new Cardinals coach Kliff Kingsbury as an offensive assistant--with apparent responsibility as passing game coordinator and quarterback coach. The Cardinals have high hopes for their first-round draft pick (No. 10 overall) QB Josh Rosen who has just completed his rookie season.

South Pender wrote: ↑Sat Jan 19, 2019 9:47 pm For those who remember Tom Clements from his days in the CFL, you may be interested in his latest destination in the football world. According to Pro Football Talk, Clements will be joining new Cardinals coach Kliff Kingsbury as an offensive assistant--with apparent responsibility as passing game coordinator and quarterback coach. The Cardinals have high hopes for their first-round draft pick (no. 10) QB Josh Rosen who has just completed his rookie season.

Huge comeback OT win by the Rams to win the NFC, with help from an obvious pass interference no-call which could have sealed a win by the Saints. 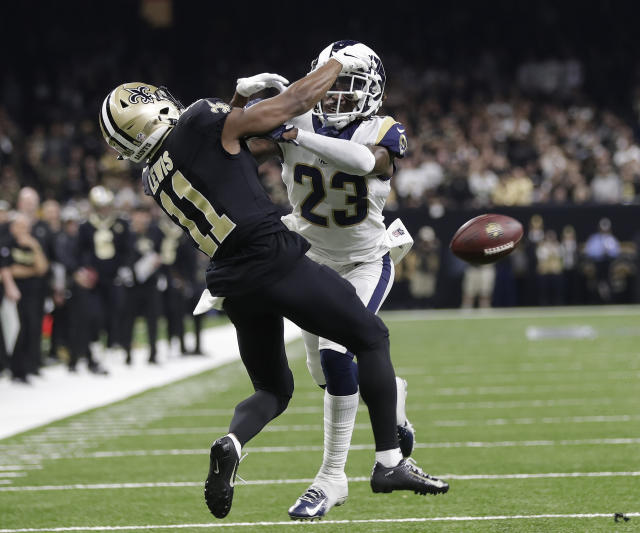 I've posed a similar question before. If the KC Chiefs win the AFC, then which team will those in the city of St. Louis root for? Geographically speaking, the KC Chiefs may be the closest team geographically and they can be considered Missouri State brothers. On the other hand, the LA Rams are the legacy of the St. Louis Rams (albeit a re-relocation).
Last edited by Robbie on Sun Jan 20, 2019 5:12 pm, edited 1 time in total.

I didn't see the non-call live but the video shows the Saints were screwed. Bush league.

What a crock of BS. Win the coin toss in OT and score a TD and KC doesn't get a chance to even the score!!!

Only the NFL can screw up overtime. 2nd time recently that the Pat's escaped. BB

Yup and they're saying that the CFL is bush league

Missed the games. Watched the highlights. Reffing controversies of course.

But there were many, many amazing moments.

Was there not talk last summer that the Patriots might have difficulty putting together a solid defence? Were there not question marks on offence? No matter.

Excerpt from Sean Wagner-McGough, in a very detailed review of the game ...


But the first half mattered. It mattered because it's when the Patriots built themselves a 14-point lead, a cushion against the unstoppable machine known as Mahomes. They needed every point to hold off Mahomes in the end. It's what got them into overtime.

Fittingly, to gain an early lead over the high-flying Chiefs, the Patriots turned back the clock. While the rest of the league -- with the Chiefs at the forefront of the revolution -- has adopted exotic passing attacks that has moved the NFL into an era of peak passing football, the Patriots zagged by adopting a run-heavy offense that has turned Rob Gronkowski, the most explosive tight end in NFL history, into a blocker and Brady into a handoffer, check-downer, and third-down passer.

Their method of attack worked. The Patriots came out with the purrfect game-plan and executed it just as perfectly. They played keep-away from the Chiefs with a run-heavy approach -- mainly with rookie Sony Michel, who rushed for 113 yards and two touchdowns -- that milked the clock, dumped the ball off with James White (49 receiving yards), converted key third downs (13 of 19), and ran some more clock (43:59 to 20:53 in time of possession).

They started the game with a 15-play, 80-yard touchdown drive that took more than half of the first quarter. At the end of the first quarter, the Patriots had outgained the Chiefs 119 to minus-11. They ended the first half with an eight-play, 90-yard drive that both reached the end zone and left no time for the Chiefs to score any points of their own. At halftime, the Patriots led 14-0, owned a 245 to 32 advantage in yards, and a 12-plus minute advantage in time of possession. Mahomes was a measly 4 of 8 for 65 yards and one missed touchdown. The Chiefs had run 16 total plays. The Patriots had picked up 16 first downs.

The game was unfolding exactly how Belichick had foreseen. He'd drawn up the purrfect plan. And his players were executing it perfectly.

Super Bowl could be good. Rooting for the Patriots, to a degree.

I listened to the radio call for the Rams/Saints game. Very exciting finish... even with the missed call.... and a 57 yard FG to win... after a 48 yard FG to tie... money kicking!

All the way down the chart, not much to pick between them both, except that NO owned the first quarter.... but settled for field goals twice..... and the Rams fought back.... on that basis, I think you could argue that the Rams were the better team on the day.....

I don't think the term "bush league" can reasonably be applied to the NFL, but there may be a need for a rule change regarding OT. Perhaps the simplest thing would be to just go to as many 10- or 15-minute periods as are needed (in a playoff game) to have one team end up ahead at the end of one of these periods, eliminating the current provision of ending the game if a TD is scored on the opening drive by the team winning the coin toss. To prevent games going on too long, they could limit this to one OT session in regular-season games and, if necessary, end the game in a tie. This one OT period is the current norm. If it were a playoff game, they would have to keep going until one team was ahead at the end of an OT period. Or they could go to the system we have in the CFL (as does US college football) of alternating possessions from the 35 or whatever until one team comes out ahead. The OT rules have been changed over the years in the NFL, and it may be time for another rule change.

Edit. Just ran across this piece from Mike Florio about the inherent unfairness in the current OT procedures:

The real negative in yesterday's excellent games, in my opinion, was the uncalled defensive PI foul in the Saints-Rams game. Had it been called, as it should have been, the Saints would most likely have won, given that they could have burned a lot of the remaining 1:49 left on the clock (the Rams had only one time-out left) and then kicked a game-winning field goal, leaving the Rams with insufficient time (maybe 20 seconds) to tie the game and force OT. It's just a really tough blow for all the Saints fans, and unfortunately stained a great game.

My guess is that there will be calls for the firing of side judge Gary Cavaletto or down judge Patrick Turner. And in this connection, I just ran across this tidbit:

And here's a post-game statement from the Rams’ PI offender, Nickell Robey-Coleman (who would have been well-advised to keep his mouth shut about this):

I guess there will always be a few bad calls by the officials--whether it's the NFL or CFL. Maybe it's unavoidable--inevitable human error--no matter how many replay cameras and angles are available. But sad to see a game decided by one....
Last edited by South Pender on Mon Jan 21, 2019 10:50 pm, edited 7 times in total.

Let's face it.... the OT rules are designed to finish the game quickly so that the TV schedules are not impacted by lengthy games, especially in the regular season when you have games going back to back. Maybe now, since there is a push to have PI reviewable, the NFL will come up with a OT approach that recognizes that you cannot have the game end in a tie like regular season ..... maybe for the playoffs and SB, each team gets one drive to score a TD and PAT, and if each do, then the next scoring drive wins the game (FG or TD).

I 'm trolling with the BUSH league... but if two CFL playoff games were decided like these games, we'd be hearing this claim by everyone.

I get the TV issues for back to back games but at least the CFL doesn't let one team win either a regular season or playoff game with a coin toss. Do it CFL style. Today with PVRs the overlap in games is less important than when the rules started.

The NFL isn't a very forward thinking league like even the NBA is and is behind the CFL.

He was cheering for the Pats here too:

Go Pats! Outside zone for the TD

Looks as though this change (making PI reviewable) is going to be considered:
‏
https://profootballtalk.nbcsports.com/2 ... eviewable/