That was one of the most entertaining football games I've ever seen (and that includes both NFL and CFL). Just 1 punt has to be a SB record. Both defenses were sorely lacking, and the placekicking miscues (in a controlled environment) added to the surprises.

I watched it at the Rio Theatre this year with several of my friends who are NE fans (I've always been NFL team neutral). There were a lot more PHI fans there, but I understand last year more where cheering for ATL. (It's probably more an anti-Patriots thing than anything else).

I agree with South Pender that Wentz will still be the starter (if he's back from injury rehab in time for the season start). PHI would be wise to try to keep both QBs if they can afford to.

1. the 4th down gamble by the Eagles

Just for clarification, are you referring to the 4th down gamble late in the second quarter that resulted in a Eagles touchdown, or are you referring to the Eagles penultimate possession that continued the drive and ultimately resulted in the game winning TD. If it was the latter, then yes it was smarter to take the gamble instead of punting as if that happened, in all likelihood Brady and his offence could have put game away by taking all the time off the clock.

Actually both. I had forgotten about the 2nd half gamble. I was referring to the TD play but that one in the 2nd half was equally as important.

And in reference to some of the other comments about the half time show, I didn't think it was the greatest either but I still appreciate that they seem to put a lot more time and energy into making it a production. Ours just feel very rudimentary and let's be honest, the acts aren't always good enough to make up for the lack of production values.

New articles like this always trigger interesting discussion about established good QB's vs. their injury replacements who do well in an important game. According to this article, Carson Wentz will not get credit for the Super Bowl win.

And it references Super Bowl winning QB's such as Drew Bledsoe and Steve Young in three of the four 49ers championship years and in contrast, also refers to Doug Williams as a Redskin. 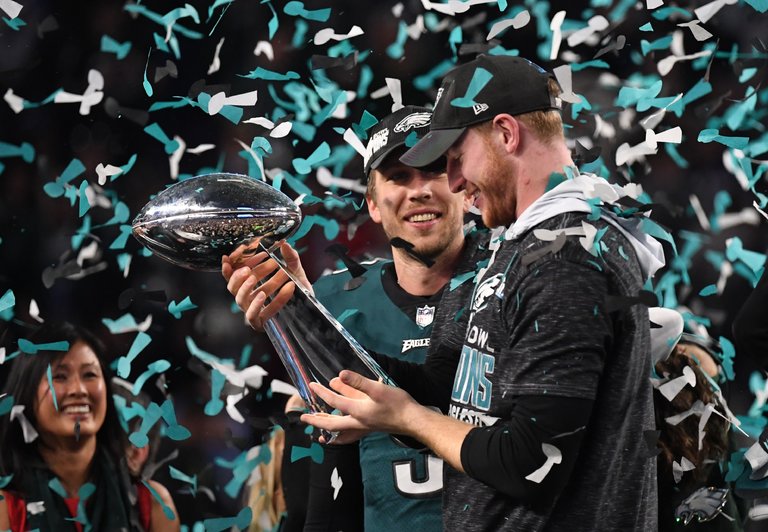 Likewise in the CFL Grey Cup, there are fair number of cases as well:

1. In the 1987 Edmonton Eskimos GC win does everything remember Matt Dunigan performing well in the regular season and playoffs? No, everyone remembers Damon Allen's off the bench MVP performance. The Eskimos agreed to trade Dunigan to the Lions and make Allen the starter in 1988. But Allen got injured and eventually Tracy Ham won the starter job for most of 1988.
2. As I stated countless times, Kent Austin was underrated as a Lions QB and everyone remembers Danny McManus in the Lions 1994 GC win. Austin was traded away in the off season.
3. Had the Lions manage to pull off a win in the 2004 GC, would game starter Dave Dickenson be better remembered than the 2004 season MOP Casey Printers? I would say so.

But on the other hand, there are still some cases in which the starting QB on a Super Bowl game wouldn't get full credit for the win and it goes back to the topic of Game Managers, with the best example of Trent Dilfer as QB for the Ravens Super Bowl XXXV championship despite the blowout 34-7 blowout win. And as I also stated before, from a Blue Bombers fans I would say that when it comes to legendary and memorable Blue Bombers QB's, Sean Salisbury and Tom Burgess would hardly be considered.

As expected, a handful Eagles players will decline an invitation to the White House:
https://www.cnn.com/2018/02/06/politics ... index.html

a lot less than I expected.