The top two teams in Mens's curling met tonight and Sweden came out on top with a 5-2 victory. Canada's record is 4-1

Currently, Canada has 5 of each kind of medal for 15 medals third in the rankings behind Norway and Germany.

Speaking of Norway, no doubt they are always a powerhouse in many winter sports and always perform well in various winter sports tournaments such as the Winter Olympics. But one winter sport they've never done well at all is ice hockey and unlike their Scandinavian brothers in Sweden and Finland, the Norwegian men's national ice hockey team historically would not qualify, let alone win a medal. I'll concede that I'm not an expert when it comes to Norway vs. Sweden vs. Finland in terms of culture but I believe they are relatively similar and all of them excel in winter sports, but Norway was never elite in ice hockey. Perhaps it has to do with funding in that sport and would rather fund other sports like skiing.

Rachel Homan finally broke into the win column by demolishing the Americans 11-3. Hope she has finally turn her game around.

Another Gold in men's bobsled. They finished in a tie with Germany

In women's hockey Canada advances to the Gold medal game against their arch rivals the US after defeating OAR 5-0 in the semi final.

Virtue and Moir set a world record in ice dancing and capture gold. This in addition to their already team gold and gold in 2010 and a silver in 2014.

Duhamel and Radford get bronze in pair figure skating.

What a performance by Virtue and Moir under tremendous pressure. The greatest dance skating couple ever.

Several more medals for Canada, including bronze in women's bobsleigh and Brady Leman has won gold in men's ski cross.

TheLionKing wrote: ↑
Sat Feb 17, 2018 11:46 am
Rachel Homan finally broke into the win column by demolishing the Americans 11-3. Hope she has finally turn her game around.

TheLionKing wrote: ↑
Mon Feb 19, 2018 5:31 pm
In women's hockey Canada advances to the Gold medal game against their arch rivals the US after defeating OAR 5-0 in the semi final.

There will be another medal for Canada tonight.

For men's ice hockey, Canada defeated Finland in a hard fought game. While Finland has won a fair amount of silver and bronze, they've never struck gold and won't do so either in this games. Team USA is out as well after a shootout loss to the Czech Republic, while Germany upset Sweden for a semifinal between Canada vs. Germany. Should Canada take for granted for Germany thinking that since it was never a powerhouse, it should be simple win and the Germany's luck will simply run out like Team Belarus and Team Switzerland when they made the odd upset?

Ben Scrivens injured in the game. Hope he's able to go against Germany

Canada trailing the US 1-0 after the 1st period in the Women's Gold Medal game. Canada was assessed 3 undisciplined penalties. US team looked more skilled, stronger and faster. Canadian women can't seem to make 2 consecutive passes in a row.

Two 2nd period goals have now given Canada a 2-1 lead.

Canada loses 3-2 on a shootout. Poor line change resulted in the Americans tying the game in the 3rd period. 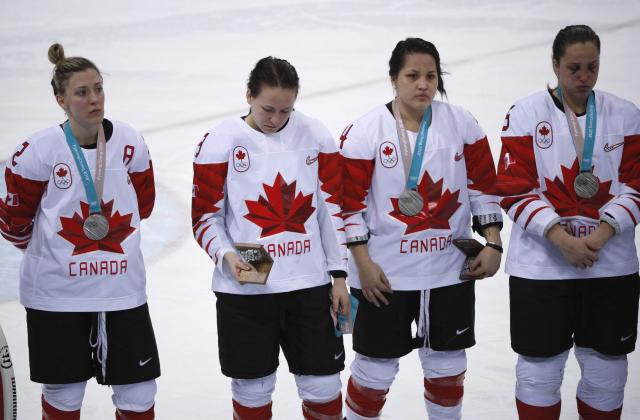 The Americans were faster, stronger and more disciplined. Canadians shot themselves in the foot by taking 3 undisciplined penalties in the first period forcing them to play on their heels and not building any momentum.