BC 1988 wrote:The Jays made quick work of Texas with a series sweep....

I am totally bummed, sigh

Every day that passes is one you can't get back
Top

Not a baseball fan but tonight's game was for the ages.

That wss not an easy win tonight. Indians came back twice from large deficits. I thought they would do it a third time in the 10th inning. Maddon manages a game kind of like Wally. Plays it "safe," wishing and hoping. Conservative. But his guys kept after it.

At this time of year, baseball absolutely rocks.

Robert Zemekis' prediction in his Back to the Future Part II film was just off by one year which isn't too bad - albeit it wasn't a sweep over Miami as indicated.


In any case, excellent job by the Cubs in fighting back from a 3-1 deficit and winning games 6 and 7 in Cleveland. I suppose Cleveland can take consolation that their Cavaliers still won a championship a few months ago, but certainly their Browns won't win the Super Bowl this season.
Last edited by Robbie on Tue Aug 01, 2017 8:56 am, edited 1 time in total.

I once cheered for whatever baseball team Bo played on just because of Bo.

I decided this week to cheer for the cubs when I read about Comrie being one of the owners.

I remember watching game 6 of the 2003 NLCS when the Cubs were 5 outs away from advancing to the World Series when a fan named Steve Bartman allegedly interfered with a possible foul catch fly out. He has just been given an official (not replica) 2016 World Series ring by the Cubs organization. I guess that's one way to get an official World Series ring, though I wonder if he's willing to trade that in exchange for all the harassment that he's received since that incident.

Fans should realy just keep their hands inside the fan area. I can't think of another sport where fans can put themselves out into the field of play.

Sir Purrcival wrote: ↑
Tue Aug 01, 2017 4:50 pm
Fans should realy just keep their hands inside the fan area. I can't think of another sport where fans can put themselves out into the field of play.

ikr, they need to control themselves.

Another World Series going to a game 7. Who do you want to win between the Houston Astros and the Los Angeles Dodgers?

The Astros have never captured the World Series. Whereas the LA Dodgers last won the World Series during the fall of 1988 with Orel Hershiser's MVP pitching and Kirk Gibson's walk off home run in game 1 that allowed them to update favoured Oakland Athletics.

Who remembers the fall of 1988? The Great One started playing for the Los Angeles Kings after the summer trade, the BC Lions went on a hot streak to win two road playoff games to advance to the Grey Cup, the Vancouver 86ers won their first CSL title, rookie Trevor Linden started for the Canucks, and George HW Bush and Michael Dukakis were competing to become the next U.S. President.

Robbie wrote: ↑
Wed Nov 01, 2017 11:17 am
Another World Series going to a game 7. Who do you want to win between the Houston Astros and the Los Angeles Dodgers?

I was neutral re these teams going in, but this changed when Astros' Yuli Gurriel mocked Dodger Yu Darvish with a racial gesture. Now, I'm pulling for the Dodgers. Just no place for this kind of crap in sports.

October and November. The only times I watch baseball.

I was able to catch the final 5 innings tonight, and a big part of the amazing Game 5.


''Who is on first,'' answers Abbott to Costello. This time it was ... Yeah. That guy. The guy that gets suspended next year for his racist gesture. Yuli Gurriel.

Pitcher? Tomorrow. Charley Morton. Pitcher. Very, very impressive. Kind of an unheralded veteran. But other pitchers rate him highly. The Dodgers got nothing off him. No threat whatsoever.

Not a baseball fan but glad Houston won.

Anybody intending to watch game 7 of the 2019 World Series?

As the Nationals are the legacy of the Montreal Expos, then I wonder if Montreal and possibly all of Canada will be rooting for the Nationals given the fact that their ancestors were from Canadian-based MLB team.

And finally.....coincidentally, there's also a Houston at Washington game on the same night tonight when the Rockets are playing against the Wizards.

I'm rooting for the Expos. BB

Amazing comeback 2019 World Series win by the Washington Nationals, for both game 7 and the series when they trailed 3-2 after being demolished in Washington DC in games 3 to 5. with their hard hitting bats in the latter innings and all on the road. They did the same thing in the NLDS. This was the very first time in a World Series in which went to seven games that the road team won. Perhaps moving forward, the team with the better record gets to choose whether to host 3 or 4 games because obviously in this series, the road team dominated.

I have a lot of respect for them for winning all four games on the road with their comeback wins. I wonder if the city of Montreal is proud of their legacy and finally winning it all after their Expos came close to winning the 1981 NLCS and had a great chance of winning in 1995 with the best record before the players strike.

After all, the Washington Nationals have acknowledged their ancestors as in their National Park, both Gary Carter, Tim Raines, and Andre Dawson appear in the ring of honour with their Expos logo. 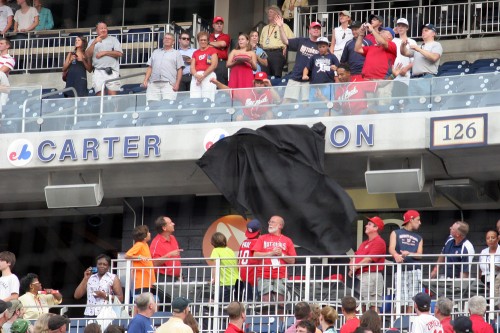 If there's any consolation for the city of Houston, their Rockets won a shootout 159-158 over the Wizards tonight.